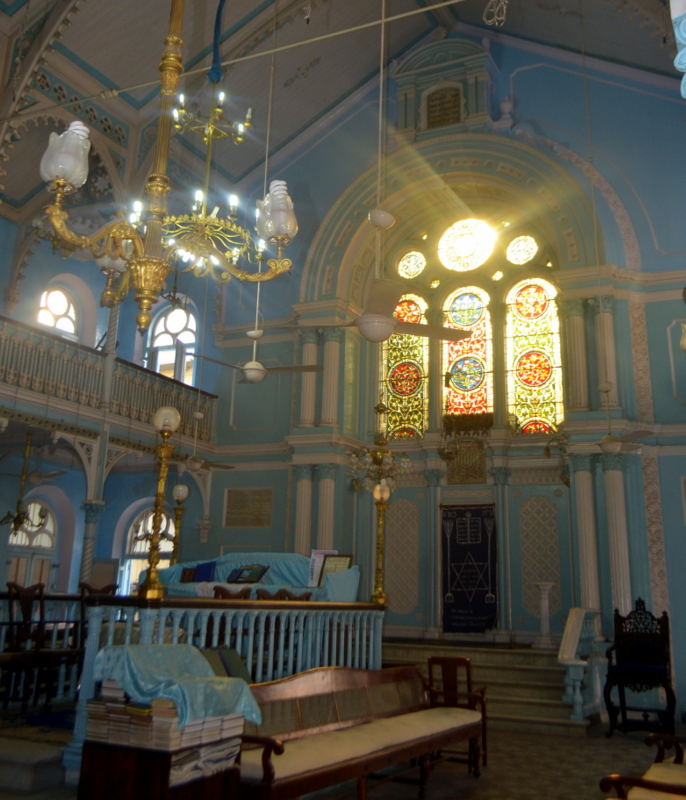 Once numbering around 30,000, today Mumbai has a Jewish population of approximately 4,000, and still boasts about 10 synagogues. The 2016 INDIA: MY SECOND HOME participants toured two Indian Jewish congregations: Magen David and Tiphaereth Israel.

Built in 1864, Magen David was constructed by David Sassoon in Victorian style for the growing population of Baghdadi Jews that settled in the area. In 2011 for the celebration of the synagogue’s 150th anniversary, it was restored. Also on the grounds are two Jewish schools operated by the Sir Jacob Sassoon High School Trust and the E.E.E. Sassoon High School Trust, in which Jewish children were originally educated. Over time, most of the Baghdadi Jews made aliyah or moved abroad, so with a scarcity of Jewish students, the schools opened to all communities.

Tiphaereth Israel Synagogue, built by the Bene Israel community, is another of the city’s older houses of worship. The congregation initially rented a building in 1886, but outgrew the premises and by 1924 constructed a permanent house of worship. It regularly holds Shabbat services, religious studies and various other activities, and also has a mikvah on the premises. We got to meet and were given an overview of the synagogue’s history by its president, Aaron Benjamin, whose father and grandfather also served as congregational presidents.

Our group got to enjoy Friday evening Shabbat services and dinner at Knesset Eliyahoo, the city’s second oldest synagogue that was founded in 1884 by Jacob Elias Sassoon, son of Eliyahoo David Sassoon and grandson of David Sassoon. After the traditional service, our group, another tour group from the United Kingdom and other foreign visitors joined many worshipers from the Mumbai Jewish community for a fantastic – and enormous! – spread of delicious local kosher Jewish cuisine.  On Shabbat morning, a group of us went back to Kenesset Eliyahoo for services, after which there was a communal lunch with wonderful people and food. Reciting the Birkat HaMazon (Grace After Meals) and singing ‘Oseh Shalom’ together with Indian and visiting Jews from around the globe was lovely and truly connected us all.